A hair-raising high-steaks adventure, maid to order! Hamburger-standing on ceremony; The three-hump consonant; Similarly heard third words; Dulling a sharp pain; My name iss famous; Adding on to an idiom;

Welcome to our August 26th edition of Joseph Young’s Puzzleria!

Our featured puzzle this week is tricky poser posed by Planned Chaos. We thank him greatly.

It appears beneath our main MENU and is titled “How Now, Cow Brow? Slice: A hair-raising high-steaks adventure, maid to order!”

A half-dozen additional puzzles are listed under this week’s menus. Enjoy ’em all.

Extension Chord Hors d’Oeuvre:
Adding on to an idiom

Think of an idiom with biblical origins that contains mostly nouns. Place a colon or comma (or any piece of punctuation of your choice) after this phrase. Now extend it by adding five additional words that further amplify on and elucidate the phrase.

The five words include the following (but not necessarily in this order):

1 repetition of one of the nouns in the idiom (minus, from the end of the noun, a letter and piece of punctuation). 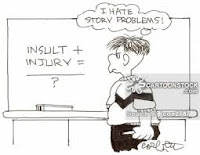 What is the idiom and its extension? What is the state?
Hint: #1: the adjectival antonyms, which begin with the same letter, appear in the lyrics of a popular holiday song.
Hint #2: There is a preposition in the idiom.
Hint #3: Both adverbial antonyms begin with vowels.
Hint #4: The state is not Iowa or Ohio, or even Maine or Idaho. (This is a “wise guy” hint.) 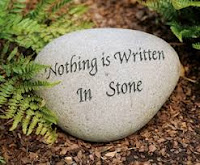 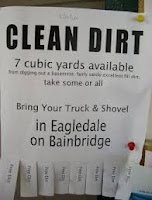 Add two letters in front of a pain-relieving product with an oxymoronic name to form a two-word tautological description you might see on a fast food restaurant menu.

Service With A Smirk Appetizer:
Hamburger-standing on ceremony

Name something, in two words, that someone usually brings to a certain religious ceremony. A one-word homophone of that thing might be served at a reception following the ceremony.

Hint: An implement with more precision than the one used in preparing what is served post-ceremony is usually a part of what is brought to the ceremony. 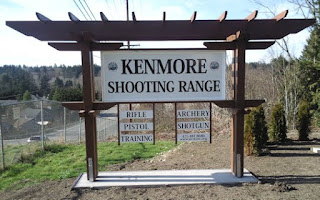 Take the name of a personal grooming tool and write it in uppercase letters. Remove a letter and rotate one of the remaining letters sideways.

Depending on which letter is removed, the result can be rearranged to name one of two different things that are often shot on a range.

What are these words?

The nine mini-puzzles below each give descriptions of a pair (or trio) of persons possessing various degrees of fame of celebrity. The first names of each pair rhyme, and the last names of each pair also rhyme.The number of syllables in the first and last name of each member of the pair (trio) is given in parentheses at the end of the descriptions. The parentheses at the beginning of the descriptions contain the initials of one (yes, just one) of the two (or three) persons described.

Who are these pairs (and trio) of persons?

(B.W.) A color-barrier-breaking MLB player, broadcaster and executive; an executive who is one of the 20 richest people in the world (1, 1) 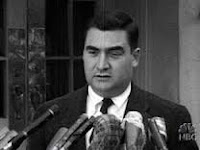 (J.C.) An actor who, because of his name, was sometimes confused with a television legend; a person who did something no one else has ever done in the Fall Classic (1, 2)

(K.C.) A presidential spokesperson; a quarterback who has a bust in Canton but who was not a bust in his second Super Bowl (1, 2) 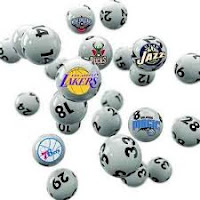 (M.W.) A singer/songwriter whose most popular album had a two-word rhyming title; a Rock and Roll Hall of Famer from Motown (2, 2)

(D.B.) A co-founder of a band whose second album is the name of a city recently in the news; an American League MVP, World Series Champ and National League Manager of the Year (1, 2)

(G.M.) An alt-rock front man who created an “extraordinarily impressive” festival, according to Merriam-Webster’s definition of the festival’s name; a character actor perhaps best known for to whom he was married (2, 2)

(J.W.) A document shredder/smuggler; a pol who’s a doc; a three-time NBA All-Star who was drafted first overall (1, 1)

(E.A.) A singer-songwriter who emerged from the Greenwich Village folk scene; two-time NHL champ who was in the early 1970’s the highest-paid athlete in the world (2, 3) 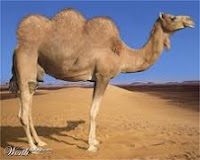 Riffing Off Crosby, Shortz And Nash (No Young) Slice:

The one-hump camel, he’s Arabian
The two-hump camel, he’s a Bactrian
No three-hump camel?
Wait, there’s maybe an
Offsprung crossbred tri-humpbackedrian!*
(* “Tri-hump” anagrams to both “triumph” and “Hi, Trump!” – that is likely not an auspicious omen.) 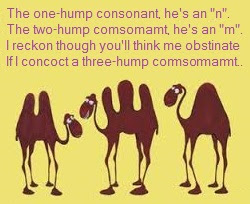 I propose introducing a 27th letter to the alphabet. It looks like a three-hump “m”. I call it the “emen.” Actually it is the 25th letter in my new Puzzlerian! Alphabet, because my “emen” will replace both the “m”and the “n”. Wherever either an “m” or “n” appears in a word, simply replace it with an emen!

How should an emen be pronounced? About halfway between an “m” and an “n”. Just touch the top of your tongue to the roof of your mouth just above the teeth while holding your lips together… well, it does take a bit of practice. 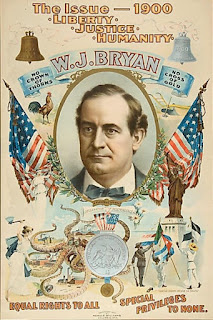 My proposal has a few flies in its ointment, of course, when it comes down to actually applying it to the skin of your text. “Cone” and “come,” and “mice” and “nice”, for example, will be indistinguishable when you replace their “m”s and “n”s with emens. But I am confident these flies can be somehow swatted.

In the following puzzle, an emen must be substituted for each “m” and each “n” that appears in the names of the persons I am asking you find:

Name (in three syllables) a famous character from a TV sitcom and another somewhat famous person (in three syllables) who was the presidential nominee of a major political party. Their first names rhyme, as do their last names. The initials of one of the names are A. L.

Who are these famous people? Amen! 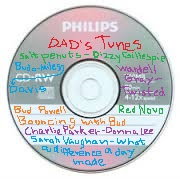 Rearrange those 14 letters to form two captions of 8, 3 and 3 words each.

One caption applies to the image of the CD (compact disk) above.

The other caption (which includes a shorthand synonym of “images”) applies to the remaining three images here (as well as to the image with the bear in it at the top of this week’s blog).

There are two acceptable possible 8-letter words for this first caption, the picture of the compact disk.

What are these nouns in the news?
What are the two captions?
Hint: The third words in the captions rhyme.

Note: The 8-letter proper noun includes a space, which makes it appear as two words.

We invite you to make it a habit to “Meet at Joe’s!” If you enjoy our weekly puzzle party, please tell your friends about Joseph Young’s Puzzleria! Thank you.
Posted by legolambda at 1:44 AM 142 comments:

Welcome to our August 19th edition of Joseph Young’s Puzzleria! 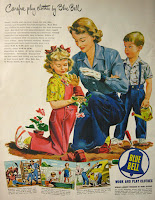 Our feature puzzle this week is a fine contribution by David of Seattle who most recently sent us a “Ripping Off Shortz” puzzle titled “Treading the Borders” that appeared in our June 10th Puzzleria!

David’s offering this week is another Ripping Off Shortz Slice titled “Subtracting letters from Olympiadders” It appears beneath our main MENU.

Seven additional puzzles are listed under this week’s menus. Why not order them all? They are excellent brain food for satisfying your “Thinking Good, It’s Friday” hankerings.
Please Enjoy.

The plural forms of a critter and a food (8 letters and 10 letters) begin with the same four letters, and share three of their remaining letters in common.

Name a close relative of the critter, in 8 letters. Change its fourth letter to a different vowel. Add another vowel near the end of the word. Place a duplicate of that vowel at the beginning of this result, then rotate that vowel 90-degrees clockwise to form a 10-letter singular synonym of the food.

What are these two critters and the two food synonyms?

Two gold medal winners in the 2016 Rio Olympics – one competing in swimming, the other in track and field – share a reciprocal peculiarity that has to do with the countries for whom they compete and their first names. 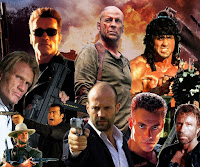 * A best-selling contemporary novelist;
* A past movie star often cast in “macho/action” roles;
* A past silent movie star who was blessed with pantomime skills; 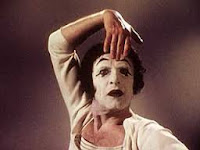 * A singer/songwriter/actor;
* A past rock/jazz keyboardist; and
* A “Futurama” character voiced by David Herman.

The names of all six of these people share something somewhat unusual in common. What is it? 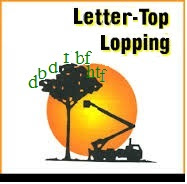 Rearrange and put into lowercase the letters of the name of a person who has been recently in the news, forming two words: (1.) the newsworthy incident in which the person said he was involved, and (2.) a word reportedly describing either some of his personal belongings or the daytime temperature of the city where the incident reportedly took place.

Lop off the top part of the first letter in the second word to form a word that – as the news story is developing – possibly may now modify the first word.

Who is the person? What are the two words and the possibly “modified” modifier? 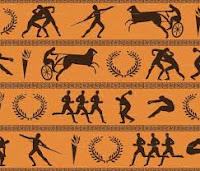 Will’s Shortz’s National Public Radio Weekend Edition Sunday Puzzle from August 7 reads:
Name a famous Olympics champion, past or present – first and last names. Remove every letter from the name that appears exactly twice. The remaining letters in order will name certain minerals. Who is this Olympics star? 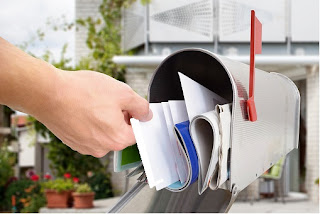 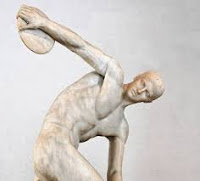 Interchange the third and fourth of the remaining letters, and you will get the last name of a second famous Olympics champion, past or present. 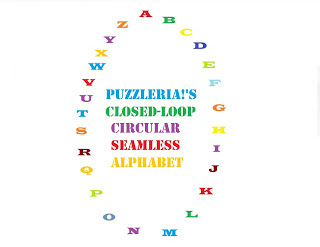 Remember, from time to time, I have been known to cheat. Who are these Olympics stars? 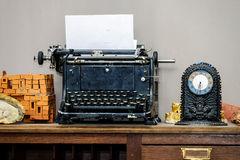 Will’s Shortz’s National Public Radio Weekend Edition Sunday Puzzle from August 14 reads:
Take the name of a country. Among its letters is the name of a part of the human body, reading from left to right, although not necessarily consecutively. Cross out these letters. The remaining letters in order, reading left to right, will name part of an animal’s body. What country is it? 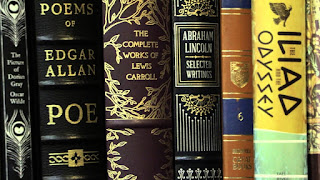 What are these two nations? What is the novel title?

Take the name of a nation. Among its letters is the name of a part of an animal’s body, reading from left to right consecutively. 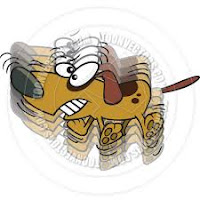 Cross out these letters. The remaining letters in order, reading left to right consecutively, will sound like the name of part of the human body. What nation is it?

Hint: If you did last week’s puzzles (one, in particular) you will likely experience déjà vu doing this one. 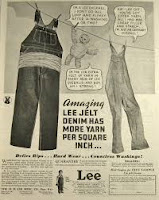 Now rearrange all the country’s letters to create two-word captions for each of the four images pictured here.

What is this country and the two molten substances? What are the four two-word captions?

We invite you to make it a habit to “Meet at Joe’s!” If you enjoy our weekly puzzle party, please tell your friends about Joseph Young’s Puzzleria! Thank you.
Posted by legolambda at 1:39 AM 168 comments: