This equality, unmercifully, is quite strained; Careering o'er the clouds; Akin to a king 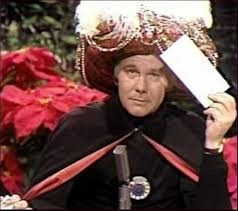 I, LegoLambda, have in the past occasionally jocularly claimed powers of clairvoyance. For example, a month ago, in the December 12, 2014 edition of Puzzle-ria!, we served up a puzzle slice titled “Hippo Triple-Team” describing an NFL contest featuring three teams with equine nicknames.

The answer: Denver Broncos, Indianapolis Colts, and the penalty-flag-flinging team of officials affectionately known as “Zebras.” 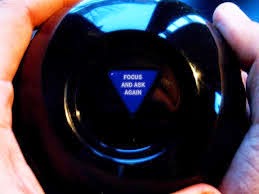 The Colts and the Broncos, with the Zebras officiating, that’s who! (The Zebras will not win.)

Which brings me to Word Woman and Paul, a pair of wonderful Puzzlerians! In the January 2 Puzzleria! comments section both posted several astute observations. Indeed, two of those comments (one each from Paul and Word Woman) proved to be quite clairvoyant about certain content in this week’s puzzle slices.

Perhaps both Paul and Word Woman have Magic 8-Balls embedded in their brains! Or perhaps they are the spiritual heirs to Carnac the Magnificent (see illustration at the top of this blog). 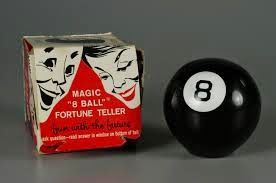 The Carnac bit was a weird hybrid of the Oscars broadcast and Jeopardy! What are my nominees for the best answers that Carnac divined before opening the envelope to read the answers?
“El Paso” and “Sis-Boom-Bah.”

That same pair of Puzzlerians! (Word Woman and Paul) also set us off on a delightful theological tangent with other comments they posted. Word Woman got the ball rolling by providing a link to Enoch Light’s rendition of C’est Magnifique,” a number from the musical “Can-Can.” Paul followed up with multiple links that, collectively, approximated a veritable Enoch Light mini-concert.

The name “Enoch” then sent us onto a discussion of the Old Testament prophets Enoch and Elijah, and the theological controversy surrounding whether they experienced natural deaths or their bodies were otherwise somehow “beamed up” into heaven “Star-Trek-like.” 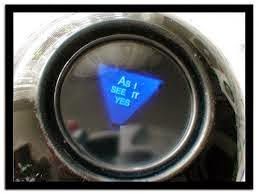 The Bible says that Elijah went up to heaven in a whirlwind, and that Enoch “walked with God.” (If former basketball player Jim Chones is a pet lover, perhaps he walks with his dog.)

Finally, Word Woman on Thusday evening alluded to an
“E-noch knock joke.” So, first I Googled, but then I DuckDuckGoosed “Enoch-knock joke,” and found the following: 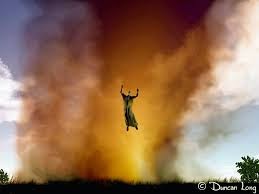 St. Peter: Hey! Knock it off, will ya? That’s expensive mother-of-pearl ornamental inlay molding on these gates. Use the doorbell, dumbbell!

Elijah: Oh, sorry about that. Ding-Dong!

Elijah: The Elijah who blew up into heaven in the whirlwind...

St. Peter: Okay, whatever. But I’m afraid we’re gonna have to do something about that body. Up here in heaven we’ve got this rule: “No spirit, no soul, no service.” 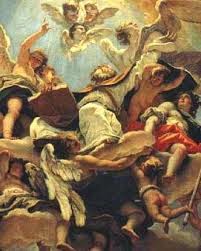 Elijah: But I do have a spirit and a soul. It’s just that I still have a body, too.

St. Peter: No, no, no. That’s not how it works. You don’t get your spirit and soul until your body dies.

Elijah: That’s not what they told us down on Earth.

St. Peter: Yeah, well there are lots of misconceptions swirling around down there, kind of like the whirlwind you claim you...

Elijah: Hey, what about that guy over there? The old bloke walking with God. He’s got a body. And it looks like he might have an “in” with God, too. 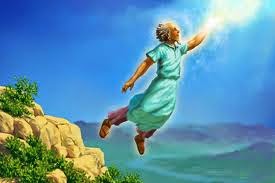 Elijah: What makes him so special? Why did you let him in?

Elijah: But why? He’s got a body, right, just like me?

St. Peter: Yeah, but when he approached these Pearly Gates he was 365 years old. I honestly thought he was dead.

St. Peter: Hell no! He rang the everlivin’ doorbell. And if you would have done likewise, instead of perpetrating that infernal knock-knocking, I might have given you a pass, too. Holy Moses, what a dumbbell!

Incidentally, speaking of dumbbells, in a June 2014 edition of Puzzleria!, I predicted that the Minnesota Vikings and Cincinnati Bengals would compete in Super Bowl XLIX (sponsored by Ex-Lax?), less than a month away, and that the Vikings would plunder the Bengals, LIV to XIII.

So much for my clairvoyance!

I do, however, foresee a salvo of “solvation” as you attack, with gusto, this week’s trio of fresh Puzzleria! menu slices: 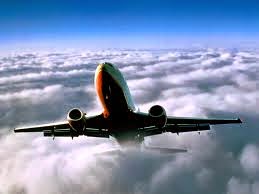 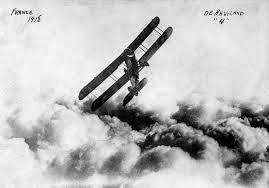 Remove the adjective’s final letter, forming a medicinal product that some say can be especially effective for those who must work at high altitudes.

What are the adjective and the product? 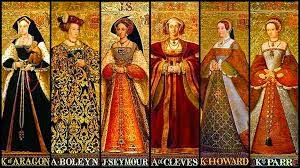 Name a two-word fictional city that is associated with a King. Change one of its consonants to a vowel. 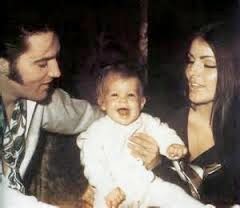 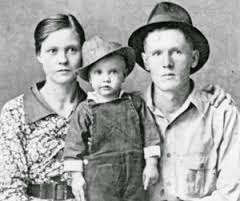 The result is two synonyms that are both associated with a king.


What is the city?


What are the synonyms?

Mathematical Slice:
This equality, unmercifully, is quite strained 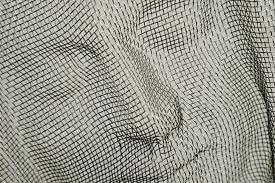 Replace the variable X with any substitute necessary to make the following equation true:

With what did you replace X? What does your finished equation look like?

Note: A, B and C are not variables but constants. Each is an irrational number and their sum is approximately 7.478… . The letters A, B, and C should be replaced in the equation by the names of the three numbers, each spelled out in letters of the English alphabet. You must decide what order to put the numbers in. 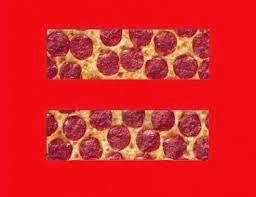 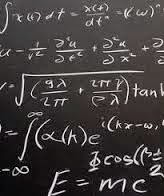 Indispensable hint: The integer 21 is not a constant but rather a “reverse variable. ” (That is, it is not a letter that represents numbers but a number that represents letters.) It appears on the back of a certain NFL football player’s jersey, beneath his hyphenated surname. But it would bring smiles to his fans’ faces if the surname were replaced by his nickname. (Oh, and such a replacement is also necessary to solving this equation.)

Also, H is not a variable; it is an uppercase H. 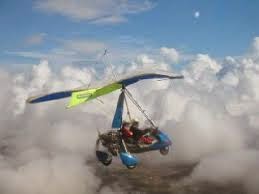 
We invite you to make it a habit to “Meet at Joe’s!” If you enjoy our weekly puzzle party, please tell your friends about Joseph Young’s Puzzle -ria! Thank you.
Posted by legolambda at 4:23 AM